Lausanne and French researchers have succeeded in counteracting the impairment of cognitive functions linked to trisomy 21 with hormonal therapy. These results published Thursday in the journal Science were obtained during a pilot study on seven patients.

Down syndrome, or trisomy 21, affects one in 800 births and results in various clinical manifestations, including a decline in cognitive abilities. Progressive loss of sense of smell is also common from the prepubertal period, and males may exhibit deficits in sexual maturation.

As they age, three-quarters of sufferers develop dementia. “It’s like an early Alzheimer’s syndrome,” says Nelly Pitteloud, professor at the University of Lausanne and head of the Department of Endocrinology, Diabetology and Metabolism at the Center hospitalier universitaire vaudois (CHUV), co-author of this research. with colleagues from the French Inserm.

Recent discoveries have suggested that neurons expressing the hormone GnRH (gonadoliberin), known to regulate reproduction via the hypothalamus, would also have an action in other regions of the brain, in particular with a role in cognition. Based on this idea, a group of researchers from Inserm in Lille (F), led by Vincent Prévot, studied the mechanism of regulation of GnRH on mouse models of trisomy 21.

The team was able to demonstrate that five microRNA strands involved in the production of this hormone and present on chromosome 21 were deregulated. This supernumerary chromosome then leads to abnormalities in the neurons secreting GnRH.

“We then succeeded in demonstrating that the reactivation of a GnRH system made it possible to restore cognitive and olfactory functions in mice with Down syndrome in a systematic way”, indicated Vincent Prévot during an online press briefing.

These results in mice were discussed with Nelly Pitteloud, whose group is an expert in the diagnosis and treatment of a rare disease, congenital GnRH deficiency, which is manifested by an absence of puberty. A pulsatile GnRH treatment – delivered at regular intervals – is given to these patients, in order to reproduce the natural rhythm of secretion of this hormone.

The researchers therefore decided to test the effectiveness of such a treatment on Down syndrome mice. Result: after 15 days, they had regained their olfactory and cognitive functions. 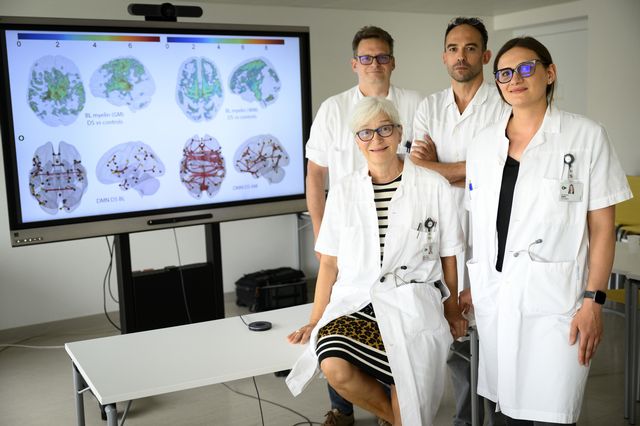 CHUV doctors conducted a pilot study on seven patients. [Laurent Gillieron – Keystone]The CHUV doctors have therefore moved on to the next stage, a pilot trial on patients referred by Ariane Giacobino, head of the trisomy 21 consultation at the University Hospitals of Geneva.

Seven men with trisomy 21, aged 20 to 50, received a dose of GnRH every two hours subcutaneously for six months, using a pump placed on the arm. Cognition and smell tests as well as MRI examinations were carried out before and after treatment.

In the end, cognitive performance increased in six of the seven patients: better three-dimensional representation, better understanding of instructions, improvement in reasoning, attention and episodic memory. On the other hand, the treatment had no impact on olfaction.

These cognitive tests were confirmed by brain imaging at the CHUV, which revealed a significant increase in functional connectivity. “We can see a new brain map approaching healthy subjects, it’s exciting,” noted Nelly Pitteloud.

The improvement is estimated between 10% and 30%. One of the participants even “passed the bar of the healthy subject”, noted the Lausanne professor, who specifies however that the collective of the study was composed of subjects very surrounded and stimulated by their relatives.

The authors want to be cautious. These results need to be confirmed by a larger randomized study with a control group receiving a placebo. It will start this fall in Lausanne and Basel and will include around sixty patients, including women. It should last two years.